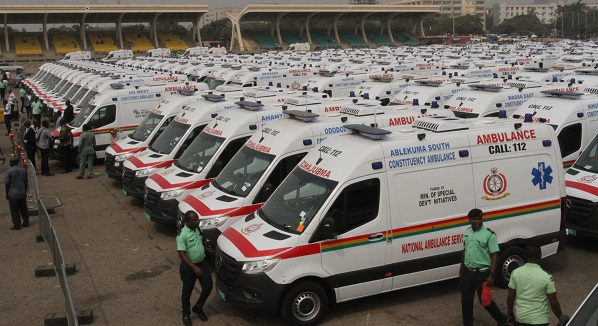 “Vince, the President has scheduled a grand durbar to outdoor the newly procured ambulances”, a colleague, notorious for his sarcasm, said. “Get out of here!”, I replied, with a smirk on my face.

I was deeply convinced it was just an expensive joke. Next thing: he shows me an official flyer from the Jubilee House to confirm the event. I was livid. I still am. I find this utterly bizarre and dreadfully myopic. It’s a blatant display of absolute disregard for the millions of Ghanaian households that have suffered immeasurable pain because access to functioning ambulances are still woefully inadequate. I really do not think that, amongst all things, we should politicise such a sensitive matter – one which is essentially about human lives.

What is this shameful insatiable desire by politicians to exploit every little situation to score political points?

The ambulances, upon their immediate arrival, should have been sent to areas in dire need of healthcare services, prioritising constituencies with high rates of casualties. But of course, when most of the roads that lead to the hinterlands are in a poor state, these ambulances will certainly not be reaching there anytime soon.

I’ve heard the argument that it is a commendable action and a campaign promise delivered. I disagree: it is a responsibility of the government and an enforceable socioeconomic right for Ghanaian citizens.

Let’s not be quick to look at this matter through the view of partisanship and undermine its importance. If there should be a social issue that can unite citizens across partisan lines, it is certainly healthcare.

The procurement of a few hundreds of ambulances is still far from the needed requirement to service over 28 million Ghanaians. We should be mindful that it isn’t every citizen that can afford the luxury of private healthcare.

The tax-paying citizens, who have done everything the Republic has asked of them, deserve change. It is unfair that a Ghanaian woman who has worked hard her whole life, in a decent profession, does not earn a pension that can cover monthly medical costs. It’s unfair to the women who have endured agonising pain during labour, and in some cases, have had to deliver babies without any professional medical support, because our healthcare system is a complete mess.

Ghana is a work in progress, let’s stay focused, there’s no time to waste. When the President does the bare minimum expected of him, it should be business as usual. Politics is a profession for visionaries – it certainly isn’t a circus for tricks and gimmicks. We can do much better to serve the people of Ghana.

Asante Kotoko have revealed the financial details of their contract extension…