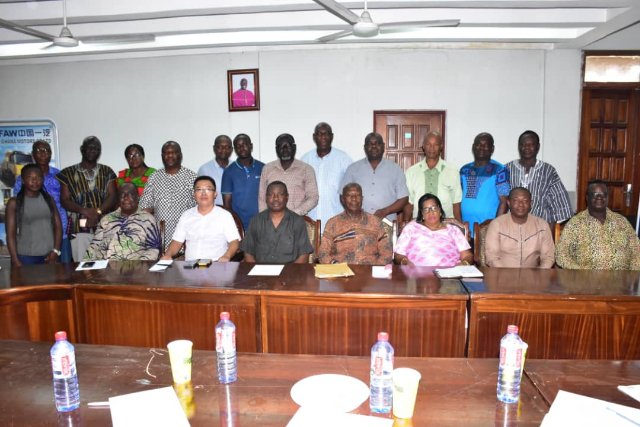 The Association of Building and Civil Engineering Contractors of Ghana (ABCECG) say they are ready to partner the government fulfil its infrastructure agenda.

They say they have urged all their members to prepare themselves to play an active role in the various infrastructure projects to be undertaken in the coming years.

Mr. Prosper Yao Ledi, President of the Association, in a get-together section said they have mapped up strategies to assist the government.

Indigenous contractors have long complained about unlevelled playing field and neglect by governments in preference to their foreign counterparts.

READ ALSO: Gov't to terminate contracts of contractors who fail to use appropriate signage - Minister

While conceding that some indigenous players have acted in ways that have negatively impacted their image, the President of ABCECG argued that the work of a few bad nut should not define all of them.

Mr Ledi said the Association has proactively begun engaging key stakeholders to procure state-of-the-art equipment that will be available to members to enable them to undertake major projects in the country.

He mentioned that the initiative has resulted in two companies, United States-based John Deere and China FAW Group supporting the Association with relevant equipment.

“Our agenda is to secure very relevant machinery so that our members can hire them to undertake major projects, so government should recognise our readiness and work with us”.

There has been a series of Made in Ghana campaigns in recent times, the most recent being a drive for the consumption of local rice.

Mr Ledi lauded the advocacy campaign but added that such a campaign must be comprehensive and extend to all sectors so that Ghanaian products and services will be preferred ahead of foreign ones.

“If we have to stop the perennial depreciation of the cedi, and high unemployment, then the Made in Ghana campaign must cover everything and we are putting our house in order for that to happen”.

A few months ago, the Minister for Works and Housing, Samuel Atta Akyea, endorsed efforts to make membership of Contactor Associations a prerequisite to qualify for contracts.

This endorsement is yielding the needed result, as a number of building contractors are going through the process to either renew their membership of ABCECG or apply for membership.

The ABCECG President commended foreign contractors who are registered with Association and said their action was worthy of emulation.

He urged other foreign construction firms operating in the country and comply and get registered.

Delayed payments and non-payments of interest on delayed arrears have been major challenges that contractors have been battling over the years.

Mr Ledi said the pain of the arrears are debilitating and said the Association will continue to engage government to bring the practice to an end. He stressed that it was a major agenda for the coming year.

The ABCECG President said 2020 will also be used pursue the setting up of the Construction Industry Development Authority, which he explained has been on the drawing board for far too long.

The building and civil engineering contractors are hopeful of a better year and said they will do all that is within their power to be credible partners in the development of the country’s infrastructure.

Government is considering compensation for Ghanaian traders whose goods have…

The National Democratic Congress, NDC and other opposition political parties…

The Agricultural Development Bank (ADB), has completed a private placement…