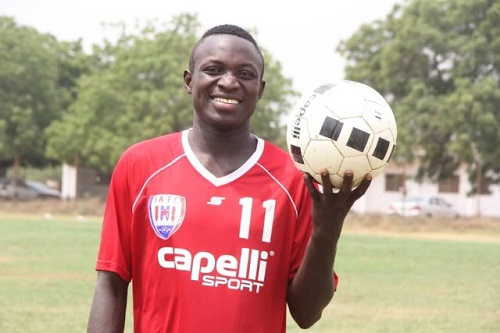 Inter Allies marksman Victorien Adebayor says he is yet to face a tough opponent the after opening 9 games in the 2019/20 Ghana Premier League.

The Nigerien has been in fine form for the Capelli Boys notching 8 goals from 9 games. His strikes have helped moved out of the relegation zone to 11th position on the league log.

In an interview with TV3 #GPLXpress, Adebayor said he has been having a field day so far.

“I’m yet to meet a tough opponent from the nine games I have played so far. I love playing football. That is all what I want to be doing.”

In-form Adebayor who is joint-top scorer with Aduana Stars' Yahaya Mohammed says his aim is to score more goals to aid his outfit to win matches.

“My targets? I prefer to do the talking on the pitch. I’m a player and all I look out for is the chance to score. So I target the opportunities that will make me score more and not just the wishes.

Goal-king? That one, only Allah knows if I will beat off the competition and win the goal-king race or not. Mine is to do well to score as many as possible whenever I play” he added

Meanwhile, Inter Allies defender Paul Abanga says he is yet to come across a striker better than teammate Victorien Adebayor in his time in the Ghana Premier League.

"He is super on the pitch and off the pitch. Talking about striking, he is a striker. Whether he shows it on the pitch or not in a match he delivers.

"He does his as Adebayor and we know on the field of play he always delivers. We have so much confidence in him and we know what he is capable of doing."

Akufo-Addo to deliver State of the Nation Address today

President Akufo-Addo will today February 20, 2020, in Parliament deliver the…